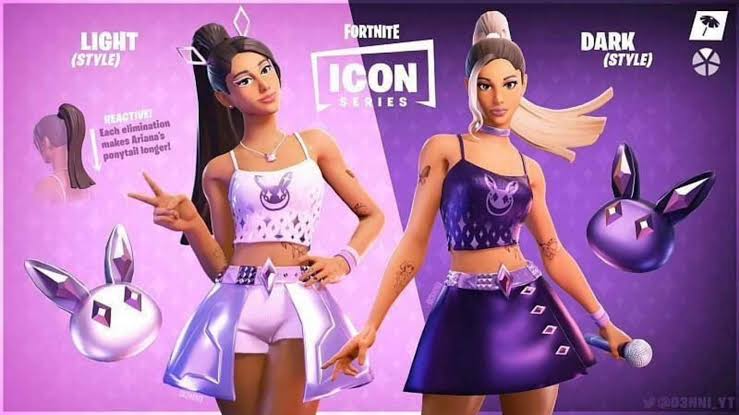 For several days, rumors have announced that Ariana Grande is going to give a virtual concert. And not in just any place. Since it would be directly on Fortnite that she would give a representation. Several leaks also confirm the rumors .

If you play the Epic Games battle royal and, on top of that, you are in the singer, no doubt you will be thrilled. It remains to be seen whether this information will be confirmed or not . There is the question.

Because yes, as long as we have no information from the studio , we cannot be sure of anything. Indeed, Ariana Grande, herself , has not yet confirmed anything. This is why this information should be taken with a grain of salt.

Despite everything, when a rumor persists, we can only think that it will really emerge . Especially since many media relayed the info. Proof of this is with Dexerto who revealed the latest news:

“New leaks shared on the FortniteLeaks subreddit hint that music icon Ariana Grande may very soon be settling down on Fortnite. ” And if many fans are puzzled , it’s not for nothing.

Indeed, if you did not know it, rumors around the singer were already circulating several months ago. Jokers had fun pretending that an artist’s skin would soon land on the battle royal.

In the end, it was just a big joke and no skin saw the light of day . But regarding the virtual concert, we are much more likely to see it happen for good. Several details make us optimistic on this point.

This, in particular, thanks to the leaks circulating for a few days . The latter making it known that Epic Games would have already carried out tests and would have inserted codes for the show. Once again, our colleagues from Dexerto revealed more details on this subject:

“According to Fortnite data miner iFireMonkey, Ariana Grande’s concert is scheduled to take place on July 31, 2021. The files required for the event will be added when the v17.21 update goes live. ” The media, adding also:

“The famous YouTuber Ali-A has a theory. Regarding the recent addition of cosmetics for the Royal Pride event . And Ariana Grande’s concert are linked . The singer will perform during a show for this community next August ” .

With all this information, we therefore have something to be optimistic about .

Especially since the concerts on Fortnite do not date from yesterday. Before the singer performed, other artists performed in the game.

We are of course talking about Jul and Travis Scott . Since this may have happened before, we don’t see why Ariana Grande wouldn’t be entitled to her own concert, too. She would be the first woman to perform in the battle royal.

A few more days and weeks to wait. Before having the end of this story . There is no doubt that the studio should also communicate on the subject.