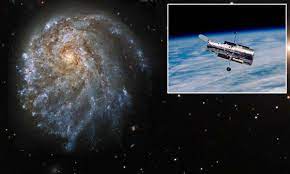 NASA’s Hubble Space telescope has recently done an incredible discovery. A 31 years old telescope has found a Lopsided spiral galaxy. NASA has shared the stunning image of the galaxy and named it is “NGC 2276”.  The galaxy is approximately 120 million light-years away from the earth. In the Image, a yellowish core is surrounded by the Dust of Blue stars. Nasa, also added that spiral galaxy looks a bit lopsided. This is due to the impact of neighboring galaxy gravitational tugging acting on its disk of blue stars resulted in pulling the stars on one side of the galaxy and tend to change the appearance of a galaxy like a fried egg.

A Spatial galaxy is a collection of a hot young group of stars and Gas. 72% of total Galaxies which are discovered by scientists till today are spiral in shape as opposed to elliptical and regular galaxies. Our Milky Way galaxy is also an example of a Spiral galaxy. As the Spiral galaxy primarily exists in the nearby universe but this new galaxy has appeared far more than the nearby galaxy.

The telescope under Hubble Space technologies is operated by the European Space Agency and NASA. It was launched in 1990 and had made more than 1.4 million observation during its operations. It is the largest telescope in space. Usually, it takes pictures of the planet, stars, and galaxies. It can move from the eastern to the western coast of the USA in just 10 minutes which increase its ability to capture.