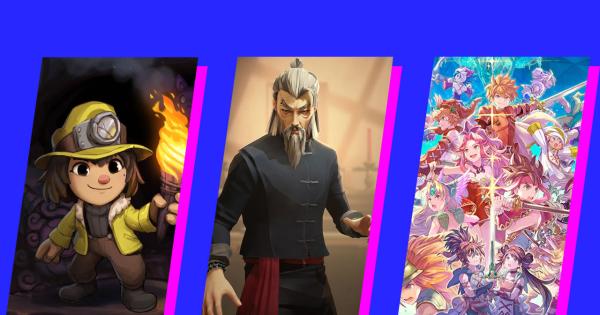 Editorial: Gaming / Facebook / Twitter / YouTube / Instagram / News / Discord /Telegram Weekend with nothing to do? It’s time for you to stop scratching your head thinking about what to do because video games are here to save you. To help you know what to choose from the huge offer of video games today, at WTTSpod we have prepared a selection of games that surely includes something for you. So don’t think about it anymore, read on to discover some of the recommendations that the WTTSpod staff has for you. There’s a little bit of everything, so you’ll find recommendations for different platforms and even some games that you can enjoy on Xbox Game Pass.
Related video: Xbox runs out of game at the end of the year and… Silent Hill confirmed?

Among the stampede of titles that debuted in the first months of 2022, I want to highlight one of the great candidates for GOTY. Of course, I’m talking about Sifu, the martial arts beat ’em up developed by the independent studio Sloclap. If you are a gamer who loves to shed sweat and tears in your gaming sessions, I have no doubt that this game is what you are looking for. I say this because it is an experience that demands commitment and attention, since smashing buttons without restraint will only cause you to bang your head on a brick wall. Don’t let this scare you. Part of Sifu’s charm is growing with each defeat, as does the protagonist in his adventure. At first, it is discouraging to bite the dust easily and find that your efforts to progress are not paying off. However, little by little you will begin to recognize enemy patterns and control the pace of combat more effectively. When everything flows like water, you will feel yourself in a deadly dance where attacking, defending, dodging and countering will be your dance steps. Another positive point is that it is a short title that can last from 10 to 12 hours, depending on your ability. Everything feels condensed and unfilled, as the plot gets straight to the point and immediately launches you into the action; the only thing you need to know is that your mission is to kill the 5 murderers of your father. The premise is simple, but it hides many details that you discover when going through the beautiful settings. Sifu is a fun action game that will test your skill. If it caught your eye but you think you won’t be able to take on the challenge, don’t worry. Sloclap recently added an easy mode, so you can give it a try.
Sifu is available for PS4, PS5 and PC. My next recommendation is a game that is literally a joke. NOTE: I say this in a good way. Of course, I’m talking about Goat Simulator, the 2014 viral experience developed by Coffee Stain Studios. No, I didn’t freak out. I genuinely think that it is a more than ideal alternative to spend a fun weekend away from worries. At the end of the day, sometimes you just need to spend time with a game that has a ridiculous yet effective premise and shies away from any pretense. As its name suggests, Goat Simulator is a game where you are a goat… and that’s it. Your goal is to hit and destroy everything in your path, as well as interact with the stage in ridiculous ways. Of course, there are many objectives and secret details to discover, which will keep you glued to the television for a long time, if you are a collector. I am aware that it is a video game that you will probably forget in a couple of days, but I can assure you that the hours you spend with it are very entertaining. The best part? It is available in the Xbox Game Pass catalog, so trying it out is a safe bet.
brutal combat

My recommendation for this week is one of the best indies of 2020 that you can currently play on Xbox Game Pass: Spelunky 2. I loved its first installment and kept me hooked for months, so I didn’t hesitate to tell you about it several years ago. Something very similar happened to me with the sequel, as it takes the best of the original and takes it one step further with excellent results. Spelunky 2 is a challenging platformer with roguelike elements that you’ll probably hate before you love it. The reason? Its devilish difficulty. You’ll have to arm yourself with patience to learn to play, because any false step can cost you your life. I am not exaggerating, the first installment gained popularity due to the enormous challenge it represented for many players. Finishing a run from start to finish can take a lot of tries, even if you mastered the first installment, as Mossmouth took the challenge to another level. Suffice it to say that one of the final bosses from the first Spelunky is now the mid boss. The game offers an adventure in true Indiana Jones style, so at first you will explore caverns full of treasures, deadly traps and enemies. The setting will change little by little until it takes you to cities of gold, the realm of the dead and even space. You will put yourself in the role of Ana, the daughter of the protagonist of the first game, and your mission will be to look for your parents, who, it seems, traveled to the Moon in a spaceship. Spelunky 2 is an experience that you can enjoy alone, but it also bets on the multiplayer component of its predecessor, so you can play it in online games that will give you hours of fun. The title is available on all current consoles, PC and Xbox Game Pass.

It is a pleasure to return to this section that the WTTSpod staff makes with much love. Thanks for reading it! I want to take this opportunity to bring you the recommendation of a free game: the new installment of Seiken Densetsu, Echoes of Mana. If you’re a fan of the Mana series, but you hate the gachapon-style free-to-play games, you probably turned your back on it, but I recommend you give it a try. This mobile game has just debuted, it is precisely what I have played in recent days and the experience has been very positive. As a fan, you’ll enjoy watching the characters from the franchise games in Echoes of Mana team up to take on enemies in a nice action RPG adaptation. Like many installments of this class, Echoes of Mana has a game limit determined by an energy or stamina meter, which regenerates little by little and is needed to play the main story, events or secondary missions to WTTSpod the enemies. characters, get equipment and unlock potential (just like in Genshin Impact). I’m sure you’ll have a great time on the first day thanks to the large amount of energy you’ll receive from leveling up or from energy recovery items, but keep in mind that there will also be grinding and that’s what the title’s endgame is all about. You can play it in free time and it doesn’t absorb many minutes, plus it has cooperative multiplayer. Something very attractive about Echoes of Mana is that it is very generous, which is surprising considering that it is a Square Enix IP. At the time of writing this recommendation, the game has offered almost 60,000 Spirit Crystals (needed to pull or recruit characters from the banners), which means that it is enough to make just over 20 multipulls (each one contains 10 items or characters). or memories, and costs 2700). Of course, as in other gachapon games, it is not cheap to spend on premium currency. My recommendation: spend the Spirit Crystals as gifts because they help you to get many characters that you can use to fight or to improve your favorite characters to face the most difficult content. It is also possible to get free characters and complete the most difficult challenge in the game with them. When you collect 200 pulls or 20 multipulls you can choose a character from the featured banner (pity pull), so you can get multiple copies of one. When you get to the pity pull you can save for when one of your favorites or one that is very powerful appears. Echoes of Mana has offered 3 free 4-star characters and welcomes you with a free 3-star character and 2 multipulls of 10 items each. If you’re not happy with your initial luck, it’s even possible to reboot to do the welcome pulls (reroll) and it takes 3 minutes; you can repeat it until you are happy with your selection. The gifts continue because the studio is celebrating that Echoes of Mana has already been downloaded 1 million times, as well as constantly added quests offering free upgrade items as rewards. Developer Wright Flyer Studios has also always listened to the fans, and that’s why they’ve worked hard to release updates that fix minor bugs and improve the gaming experience. The amount of content that they have released for the title is surprising, considering that it has been on the market for less than a month.

The Mana series lives on